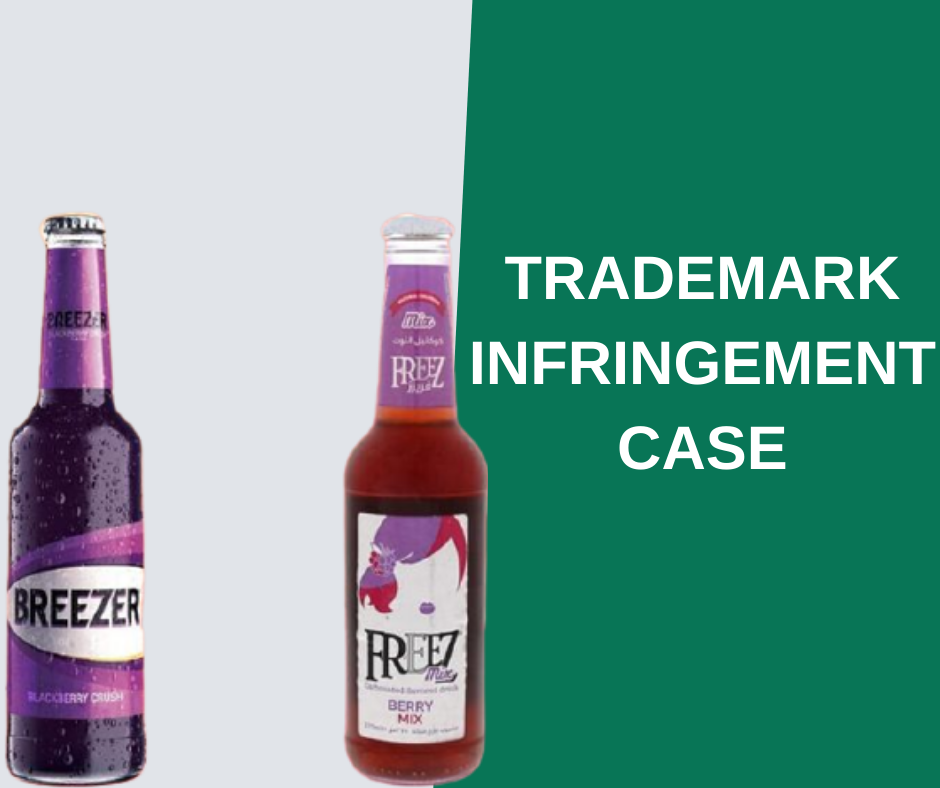 In this era of replication, there exists a desideratum for identification, as the replication of a trademark would ultimately result in trademark war. The present case is enthralling yet an intricate one.

Bacardi and Company Limited is a prominent manufacturer that sells alcohols that comprises rum-based beverages, in addition to that they sell diverse alcoholic fruit-based drinks which are named under the registered trademark “BREEZER” and its trade dress under class 32 and 33 respectively which is in use since February 27, 2003. The ad-hoc basis of this case revolves around Bahety Overseas Limited and Ors who came up with the trademark “FREEZmix” for their non-alcoholic fruit-based refreshments and the shape mark of the bottle in which the said drink is sold is also similar in design to that of BREEZER.

The case turns up when this came to the notice of Bacardi Company thence an interim injunction plea was brought before the Court and the action of infringement as well as passing off claims were made by the company citing Section 29 of the Trademark Act, 1999.

As a response to the contention of the Bacardi Company, Bahety Overseas Ltd. contended that the trademark “BREEZER” incorporates two syllables, “Bree” and “zer” while the ‘FREEZMix’ is a monosyllable. And also, bring up that “BREEZER” cannot seek to monopolize the shape of the bottle which is common to the trade, and put forward that the consumers hardly associates a product and its origin with its shape that the label on the bottle that the bottle acquired is what renders its distinctiveness.

A comprehensive investigation was done by the court analyzing the samples of “BREEZER” and ‘FREEZMix’ bottles and deduced that the prominence was on the word ‘FREEZ’ in the trademark ‘FREEZMix’ and the bottle of Bahety encompass homogeneous champagne base, ridges, and bottle top. The public won’t likely privy registration certificate of both trademark and Court on that account the Court applied the test of average man’s intelligence and his imperfect recollection in this case and concluded that there was an infringement on the ground of consumer association. The fact that there is the difference that the Bacardi was selling alcoholic drinks and Bahety, a non-alcoholic drink was not given due consideration by the Court and by way of the view of third-person perception stated that the consumers would muddle up between the brand when they perceive with the eyes visually both the wordmark “BREEZER” and ‘FREEZMix’ and thereby concluded that there was an intentional attempt by Bahety Overseas to come up with a trademark semblance to that of Bacardi’s. Thus, the court granted an interlocutory injunction in favor of Bacardi Overseas Ltd. and interdict Bahety from using the trademark ‘FREEZMix’ and associated trade dress.

By perusing this case, we can perceive that in the competitive industry, brands often contend to carve niche identity to the ruthlessly competitive spirits industry, to catch the eye of the crowd. These brands get wind that a rival might be stealing their marketing tactics for themselves, intense legal battles ensue, putting millions of monies and established repute at jeopardize. It is a so confusing and tough decision to take when usually any brand clones the trademark of any brand both consciously and unconsciously. This decision sets a well -thought out precedent. The decision of the court relied upon the important question of law by appreciating the evident validation and the court appreciated the evidence and applied the correct position of law.  As this ensures fair play in the course of trade.